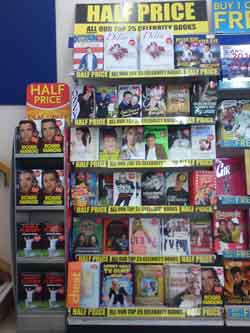 This autumn, more than any I can remember before, the book market seems to be dominated by television spin offs. This photo shows the promotional titles at W.H.Smith in High Wycombe. Look very carefully (the photo is compressed) and you’ll see a few novels — Dan Brown, Stig Larsson, Patricia Cornwell. However, virtually everything else is promoting a TV programme or personality: Jamie Oliver, Delia, Peter Kay, Ozzy Osborne, Jack Dee, Ant and Dec, Chris Evans, John Barrowman, Hairy Bikers, Leona Lewis, Al Murray, Harry Hill, Gordon Ramsay, Jeremy Clarkson, Richard Hammond — AND James May has a book out. It’s a relief to get one by a sports personality whose TV connection is almost incidental — the legendary Freddie Flintoff. I couldn’t begudge Jo Brand’s place on the shelf with her book having the title — ‘Look Back in Hunger’ — much wittier than Dawn French’s ‘Dear Fatty’.

So the advice in terms of getting a book published is obvious — just get yourself a hit TV series first. That might be slightly preferable to the route favoured by the highly naturally talented author of Standing Out , which will no doubt be a huge blockbuster this year.

I ventured out into High Wycombe on Monday in search of using up my J.D. Wetherspoon 50p off a pint vouchers that were due to expire on 30th September. The pubs were so quiet that I got served straight away in the Falcon — which is unheard of even on a slow night. Like cut-price supermarkets, Wetherspoons seem to pass on the low prices on their products in the form of less staff than their competitors. The manager even had chance to chat away to the two of us for five minutes about real ale. Shame that he didn’t notice that the Titanic Triple Screw that we had in our glasses at the time was as cloudy as soup. It was drinkable but probably only because it had a lot of roasted or chocolate malt (I think) in and that gave it a very bitter edge.

Up the road at the William Robert Loosely there was a Bateman’s special ale on that had a pump clip that seemed to be confusing itself with a packet of Weetabix — lots of picture of ‘good for you’ grains. I’ve forgotten what it was called. This was served almost frozen but that didn’t stop a whiff of diacetyl rising up from the glass. I know that some brewers actually think diacetyl (the ‘butterscotch’ aroma) is pleasurable but most of their customers don’t. I find that holding my breath when I’m drinking helps — but, of course, this disguises most other flavours. The superchilled temperature meant that I may as well have been drinking lager in that case but, I shouldn’t complain, using the vouchers two pints cost the princely sum of £2.78! Round the corner at The Bell, a mediocre pint of Pride was more than 30p dearer.

Walking through Wycombe I was struck at how few people were out in any pub or restuarant — Pizza Express was deserted. A Monday I suppose but it’s anecdotal evidence that people still seem to be holding on to their cash and I was only there to buy beer at £1.39 a pint myself.