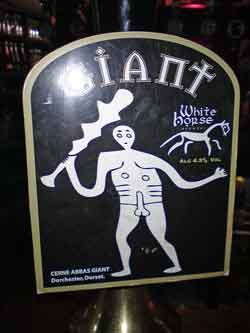 Went drinking in Flackwell Heath for the first time ever tonight. Not many people probably go there but many pass close by as it’s very close to the M40 — just behind the woods on the big hill as the road climbs out of the Wye valley at Loudwater (junction 3). The Stag was a decent enough pub and the Crooked Billet down a side road towards Little Marlow was a lovely old-fashioned country pub with an astonishingly well-tended garden — enough bedding plants, even at the start of October, to put a municipal park to shame.

In the pub it was mentioned that White Horse Brewery have a special beer called ‘Giant’. It might not be a surprise to discover that, as the brewery has the ancient Uffington White Horse as its logo, the giant in question is the famously endowed chap at Cerne Abbas. In these days where it is not allowed even to hint to under 25s that alcohol may equate to enhanced sexual success, we wondered whether the brewery would be allowed to use an image of the prehistoric figure on the brewery pump clips. Or would the nation’s twenty-something males be corrupted into thinking that drinking this real ale might have such a startling effect on a part of their anatomy. (It would be interesting to see if their partners might be tempted into buying them a pint to test the drink’s efficacy.) I’d guess that the existing guidelines might prompt the brewers into modifying their pump clip design. I suggested inverting the said organ in Photoshop but another suggestion was to put him in a pair of Y-fronts to be on the safe side. No doubt, if it’s not against the law and the brewery go ahead and display the giant and his colossal manhood then we’ll see Harriet Harman rushing the necessary legislation through the House of Commons as soon as parliament returns.

Of course, if the BMA get their way then all alcohol marketing and advertising would be banned so there would be definitely no pump clip, no matter how graphic.